Interview with Journalist of the Year Laura Kuenssberg: 'I would die in a ditch for the impartiality of the BBC' 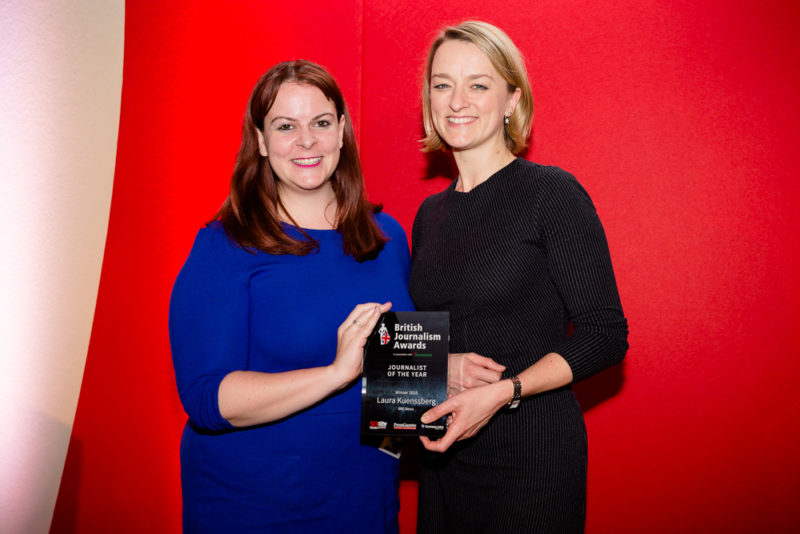 BBC political editor Laura Kuenssberg has said of a tumultuous six months in global politics covering Brexit and Donald Trump’s election that it was “like the world’s been on acid”.

Speaking to Press Gazette after collecting the prize for Journalist of the Year at the British Journalism Awards this week, Kuenssberg added the pace of news had been “relentless”.

Since June, Britain has witnessed a vote to leave the EU, a Tory leadership battle, a change of Prime Minister, a divided Labour party and the murder of an MP.

“The pace has been relentless,” said Kuenssberg, “and I think that’s the distinction.

“The cycle has speeded up so much now that you are dealing with four or five news cycles in one day and that’s been a challenge and an excitement and something that’s been a privilege to witness.

For Kuenssberg, who says she has the “best job in political journalism”, her role is clear.

“[Mine] is the job of translating what’s happening in Westminster to people up and down the country, which I think is the most important job we have as journalists,” she said.

“It’s about checking up on what politicians are doing on behalf of the people who voted them in.”

She added: “At a time when the questions are bigger, our responsibilities are bigger, and we take it very seriously.

“But also as hacks we love stories that are crashing all around you rather than taking a long time to develop and eventually emerge.”

Kuenssberg, 40, started her journalism career in America before joining the BBC as a trainee and working for BBC North East and Cumbria, later moving to Channel 4 for a spell.

She joined the Lobby (the hub of political journalists based at Westminster) in 2003 and was named political editor of the BBC late last year, becoming the first woman to hold the role.

Her work covering Brexit and the ensuing Tory leadership battle were highlighted by the British Journalism Awards judges who said she “made the story of Brexit her own”.

“Laura Kuenssberg deserves this prize for the sheer volume and scope of reporting on some of the biggest changes ever in British politics when she was just into the job of BBC political editor,” they said.

“In the days and weeks after the Brexit vote she seemed to be everywhere.

“She led the way on reporting the fast-moving developments in the Tory leadership race.

“And she did our profession proud when she put the Chinese President on the spot about human rights abuses with the one question allowed to the British media at his London press conference.”

So what does Kuenssberg, who holds arguably the most influential political journalism role in the UK, think about Brexit?

“Clearly our decision to leave the EU is the biggest political decision we will take as a country for decades,” she said.

“No one knows what the consequences will be, good or ill, and therefore I think most people would accept that the consequences of that are bigger than any choice from the general election – although those are of course huge stories too – and you’ve seen politicians grapple with that and they don’t really know what to do.

“We are also in an era where the pundit class has been proved wrong so many times that it’s ok to be a political journalist and say ‘I don’t know’.”

Asked if she had been surprised by the EU Referendum result, Kuenssberg said: “I don’t think I called it but it didn’t surprise me because we had been on the road for months before the result, not just during the campaign, and we picked up that lots of people felt that [voting to leave] is what they wanted to do.

“It’s kind of as simple as that – you knock on a door and people tell you something. And lots of politicians knew it was coming as well but they didn’t necessarily want to say it publicly.”

With the referendum dominating media coverage in print, online and on TV, competition for the latest morsel of Brexit news was – and still is – intense.

So how did Kuenssberg try to stand out from the crowd when so much was being said and written about the matter?

“I think you just do your job,” she said.

“People sometimes ask me: ‘How do you do what you do?’. And I just think you work really hard and you are really nice and then people will want to tell you things.

“[It helps] if you’re interested and have an open mind and you genuinely go and ask people questions wanting to know what they say rather than asking them to confirm what you already think.

She added: “I don’t think there would be very many reporters who were out of Westminster for the duration of the referendum campaign who would have been surprised by the result.

“I’m not having a pop at a kind of ‘lobby mentality’ at all but if you had spent March, April and May knocking on doors and talking to people at political events you would not have been surprised by the result.”

While her coverage of Brexit has won her acclaim, Kuenssberg’s reports on embattled Labour leader Jeremy Corbyn have earned her critics, largely from Corbyn’s fervent supporter base.

Chuka Umunna, MP for Streatham in London, was one of a number of Labour politicians who said the claims of bias against Kuenssberg were “utter garbage”.

In May then Prime Minister David Cameron was prompted to condemn a petition calling for Kuenssberg to be sacked after it was “hijacked” by “sexist trolls”.

Kuenssberg is stoic about the matter when asked. “Politics is a tough business and I’m not going to get into that,” she said.

EU referendum coverage in the national press was strongly biased in favour of Brexit.

Kuennsberg feels the BBC has an important role to play in terms of providing balanced coverage.

She said: “Among the many jewels and gifts that the BBC has is our editorial independence which we get because people participate in us.

“Everybody has to be part of the BBC because everybody has to pay for it. That is our precious jewel and I guard nothing more important than our impartiality.

“At the Beeb we know we’ve got responsibility to be there for everyone and that’s why we’re there.

“I was a BBC trainee so if you cut me in half I’d have the whole thing through me like a stick of rock.

“I would die in a ditch for the impartiality of the BBC. That’s what we do. And if you go to any country around the world they would say that we were lucky to have it and of course I agree.”

She is the first female political editor of the BBC since the role was created in 1970. Asked what her advice would be for young women journalists, she said: “I would say exactly the same thing that I would say to young male journalists, which is be really nice and work really hard. And have the courage to say what you think and then see what happens.”