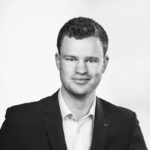 James handles Regulatory Affairs and Business Development for kompany where his responsibilities include the development of the sales, go-to-market, and partnerships strategy for the UK.

Driven by solving problems at the intersection of tech, politics and business, James previously held positions at HMG’s Department of International Trade at the British Embassy in Vienna, Venionaire Capital and the International Chamber of Commerce in London.

James holds a 1st class master’s degree in Modern Languages (French and Spanish) with International Relations and spent a year as part of his studies working at the United Nations in Geneva, in a law firm in Chile and for the British Council in Argentina. Born in Kenya, he has also lived in Austria and is happiest on a tennis court, walking in the Northumberland hills or watching cricket with his new-born son.